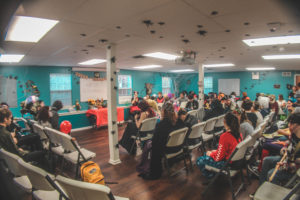 The boys and ghouls of New Hope Academy celebrated Halloween in true ghostly fashion on Friday, October 31. The students and staff marked the day by arriving to school dressed in a wide range of costumes – there were unicorns, clowns, crayons, and a menagerie of animals! At a co-campus celebration, cash prizes were awarded to the students whose costumes were a cut above the rest. Among the winners were Mason Duran, who dressed as “Thriller”-era Michael Jackson; Jaymin Serdikoff, who deservedly won “Scariest Costume”; Emma Lang and Andrew Simon, who won “Best Duo” as Lilo and Stitch; Ari Silver, who dressed as Zombie Kurt Cobain; and Nile Barlow, who won the “Best Character” award as Super Mario. Even the teachers joined in the fun! One group of teachers dressed as the characters of “Peter Pan,” while another group was Snow White and the Seven Dwarves. Coupled with free candy, a killer bake sale courtesy of the Prom Committee, and a movie shown after a pizza lunch, it was a frightfully enjoyable day for all! 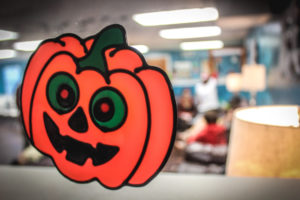