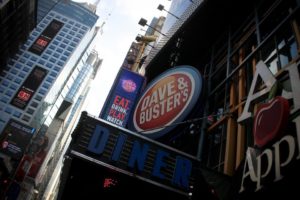 New Hope Academy students and staff stormed the city that never sleeps on Wednesday, December 12, for the annual field trip to New York City. After meeting at the Yardley campus at 8:00 am, everyone boarded two Starr buses and took to the open road. The first leg of the trip was Dave and Buster’s on 42nd Street, where everyone ate lunch. After the meal, students had until 12:30 to play games at the enormous arcade. Soon, it was time to head over to 44th Street for the day’s main attraction – a performance of hit Disney movie “Frozen”! The story tells the tale of Anna and Elsa, two sisters who were once close but have grown apart, thanks to Elsa’s uncontrollable magical powers. The audience sang along with such songs as “Do You Want to Build a Snowman,” “In Summer,” which featured the lovable snowman Olaf wishing for warmer temperatures, and the mega-hit “Let It Go.” The show riveted the audience for nearly three hours. After a standing ovation, everyone headed uptown a few blocks to the world-renowned Rockefeller Center, where they saw the famous Christmas tree. Some did some shopping, some looked at the sights, but most everyone got some dinner. Before long, it was 5:30 and it was time to board the buses for the trip home. It was once again a spectacular and successful trip, one that will be remembered by all!